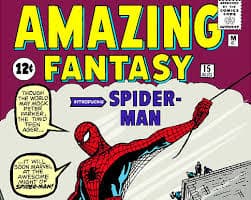 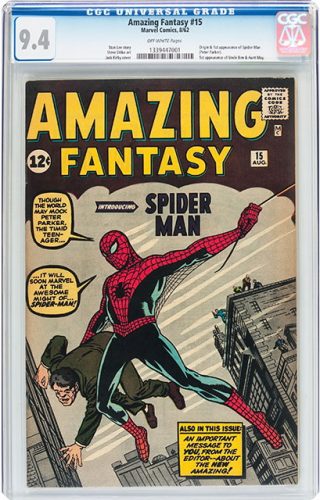 The copy was purchased in 1980 by New York area collector Walter Yakaboski, a comic book collector, who had the opportunity to buy a handful of key early Marvel comic books for the very tidy sum of $10,000 — a good bit to spend in those days. Among them was the copy of Amazing Fantasy #15, the landmark first appearance of Spider-Man. The portion of the trove it is figured today they he spent on Spidey is about $1,200.

This copy of Amazing Fantasy #15 was not known to the collecting hobby before this auction, as Yakaboski kept it almost perfectly preserved in a safe deposit box for 35 years. The book was purchased by an anonymous collector. Another Spider-Man comic from Yakaboski’s collection drew serious attention as a 1963 copy of The Amazing Spider-Man #1 sold for $110,537.

“It’s a superbly preserved copy of one of the most sought-after comic books in the world,” said Lon Allen, Managing Director of the Comics Department at Heritage. “It’s worth well more than its weight in gold. There are very few like this one.”

A copy of Detective Comics #27 — marking the first appearance of “The Batman” — shocked the auction room floor when it hammered for $167,300, despite its 4.5 CBCS grade and extensive restoration. A high-grade, Near-Mint 9.4 CGC copy of The Avengers #1 sold for $98,587. The iconic book is tied as the second-highest CGC-graded copy to ever be offered by Heritage. Perhaps foreshadowing the success of his big screen debut in “Captain America: Civil War,” a Near-Mint 9.8 CGC copy of Fantastic Four #52, famous for the first appearance of the Black Panther saw intense bidder interest as it sold for $83,650. Another key book, Tales of Suspense #57, introducing fellow film star and Avenger Hawkeye, sold for $47,800.

John Romita SR Amazing Spider-man cover art
The auction’s astonishing 99 percent sell-through rate included classics of original comic book art, including John Romita Sr.’s original cover art for The Amazing Spider-Man #62. The 1968 cover, depicting a battle between Spidey and Medusa of the Inhumans, measures 12-1/4″ x 18-1/2″ — a rare and coveted example of the comic master’s larger artworks to cross the block. A war between 26 different bidders pushed the rarity to $179,250.

The original cover art for Daredevil #9, by fan favorite Wally Wood, sold for $149,375 to the phone. The scarce, 1965 original specimen from Marvel’s Silver Age, the cover shows a strong portrait of Daredevil (with his relatively new horn-head cowl) surrounded by an action and detail-packed collage of comic vignettes.