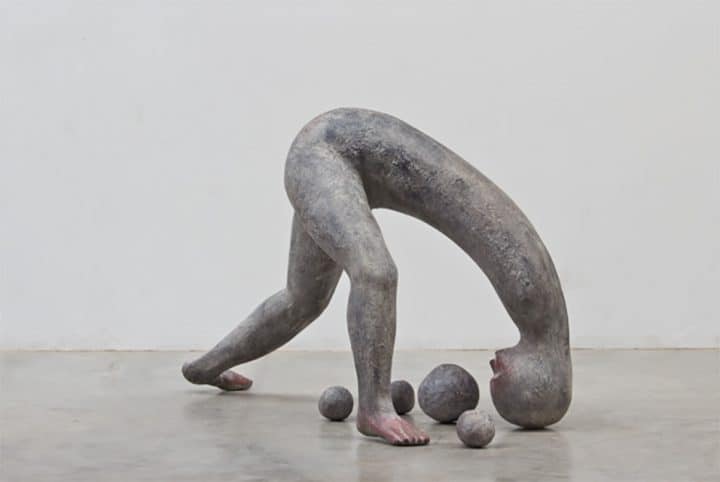 One of the remarkable things in the works of Ellen De Meutter (b. 1981) is the painterly qualities. The canvases display a large variety in paint treatment and alternate between transparent and paste-like paint surfaces. Exhibitions: Museum Dhondt-Dhaenens, Deurle, Belgium; Museum of Contemporary Art San Diego; Kunstverein Bad Salzdetfurth, Germany; and MARTa Herford, Germany.

Kati Heck (b. 1979) is to be considered an heiress to German Expressionism. One is reminded of the bars, dancers and actors of Otto Dix and George Grosz at the same time as the Old Masters. Heck synthesizes and fuses styles. Solo-exhibitions: M HKA, Antwerp (forthcoming); Corbett vs Dempsey, Chicago; CAC Málaga; and Mary Boone Gallery, New York; and group shows at Bozar, Brussels; and National Art Museum of China, Beijing.

Jonathan Meese (b. 1970) is renowned for his multi-faceted work, including wildly exuberant paintings and installations, ecstatic performances, and a powerful body of sculptures. All of Meese’s work is driven and supported by a striving for a rule of art, the dictatorship of art. Apparently effortlessly, he has developed in all genres an independent and at the same time unique vocabulary that gives his work a variety, visual energy and quality which, according to Robert Fleck, has been unheard of since Picasso.Solo shows at Gem, The Hague; CAC Málaga, Spain; Museum of Contemporary Art, North Miami; De Appel, Amsterdam; group shows at Museu de Arte de São Paulo; Guggenheim Museum; National Center for Contemporary Art, Moscow; MARTa Herford, Germany; Centre Pompidou, Paris; The Saatchi Gallery, London; and MoMA PS1, New York.

Rinus Van de Velde’s (b. 1983) has developed a practice that principally results in monumental, narrative charcoal drawings, but behind which lies a much broader production. He combines, amongst others, found and staged photography, performances without spectators, cinematic narrative techniques, installations, and sculptures. These elements serve as the basis of drawings that depict a completely different world, yet also document a very real working process that takes place mainly in the studio. Solo shows at S.M.A.K., Ghent (forthcoming); Kunsthalle São Paolo; CAC Málaga, Spain; Artisanal House, New York.

The artwork of the renowned Austrian artist Franz West (1947–2012) is remarkable not only for the creativity of the forms he invents but also for the communicative quality with which he directly addresses the viewer, urging him or her to participate. His sculptures and furniture tend to elude naming or classification. International exhibitions include: Documenta IX and X, Kassel; Sculpture Project Münster; Venice Biennial (1988, 1993, 1997, 2003, 2011); Whitechapel Gallery, London; Museo Nacional de Arte Reina Sofia, Madrid; and the Museum of Modern Art, New York.

#claudemonet – Exhibition examines the role of gardens in the paintings of Monet and his contemporaries – @artdaily.org
0 (0)