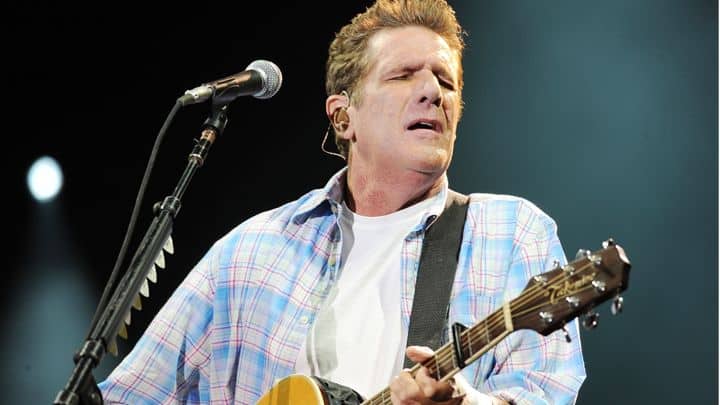 Glenn Frey, Eagles guitarist and Rock and Roll Hall of Fame inductee, passed away Monday. He was 67. “It is with the heaviest of hearts that we announce the passing of our comrade, Eagles founder, Glenn Frey, in New York City on Monday, January 18th, 2016. Glenn fought a courageous battle for the past several weeks but, sadly, succumbed to complications from Rheumatoid Arthritis, Acute Ulcerative Colitis and Pneumonia,” the Eagles wrote in a statement Monday.

Related: Cameron Crowe Looks Back on His 1975 Eagles Cover Story

“The Frey family would like to thank everyone who joined Glenn to fight this fight and hoped and prayed for his recovery,” the statement continued. “Words can neither describe our sorrow, nor our love and respect for all that he has given to us, his family, the music community & millions of fans worldwide.”

In a separate statement, Don Henley said of Frey, “He was like a brother to me; we were family, and like most families, there was some dysfunction.  But, the bond we forged 45 years ago was never broken, even during the 14 years that the Eagles were dissolved.  We were two young men who made the pilgrimage to Los Angeles with the same dream:  to make our mark in the music industry — and with perseverance, a deep love of music, our alliance with other great musicians and our manager, Irving Azoff, we built something that has lasted longer than anyone could have dreamed.  But, Glenn was the one who started it all.  He was the spark plug, the man with the plan.”

Henley continued, “He had an encyclopedic knowledge of popular music and a work ethic that wouldn’t quit.  He was funny, bullheaded, mercurial, generous, deeply talented and driven.  He loved is wife and kids more than anything.  We are all in a state of shock, disbelief and profound sorrow.  We brought our two-year History of the Eagles Tour to a triumphant close at the end of July and now he is gone.  I’m not sure I believe in fate, but I know that crossing paths with Glenn Lewis Frey in 1970 changed my life forever, and it eventually had an impact on the lives of millions of other people all over the planet.  It will be very strange going forward in a world without him in it.  But, I will be grateful, every day, that he was in my life.  Rest in peace, my brother.  You did what you set out to do, and then some.”

Frey recently suffered from “a recurrence of previous intestinal issues, which will require major surgery and a lengthy recovery period,” the Eagles announced in November when they postponed their Kennedy Center Honors ceremony from December to the following year.

The Detroit-born Frey performed with groups in the Motor City area before he relocated to Los Angeles in the late Sixties, eventually living in an apartment with J.D. Souther, his partner in the short-lived Longbranch Pennywhistle, and singer-songwriter Jackson Browne. It was Souther who encouraged Linda Ronstadt, his girlfriend at the time, to hire Frey as well as three other artists – drummer Don Henley, bassist Randy Meisner and guitarist Bernie Leadon – to serve as her backing band during a 1971 tour. When the trek concluded, the Eagles were born.

A year later, the Eagles’ inaugural lineup released their 1972 self-titled LP, featuring the Frey and Browne-penned “Take It Easy” and the Frey-sung “Peaceful Easy Feeling.” Eagles, one of Rolling Stone‘s 500 Greatest Albums of All Time, set the band on a trajectory toward being one of the biggest selling acts ever, a reputation that was cemented with the following year with the arrival of Desperado, featuring hit singles co-written by Frey like “Tequila Sunrise” and the title track.

“Sometimes I wonder if the other guys in the band know how much I like them. How much of a foundation they are. We never even talk about it. We each have our own spaces. We play sometimes and we fight sometimes,” Frey told Rolling Stone in 1975. “I get so caught up in all this – the pressures of being Glenn Frey of the Eagles, the guy who talks a lot – that if Randy or Bernie needed some confidence building, I might be too self-involved to realize it. I worry about that. But even though there’s a keg of dynamite that’s always sitting there, this band is fairly together. I just figure we can’t lose. The longer the Eagles stay together, the better it’s gonna be. No matter what. We never expected to get this far, anyway. I thought we’d break up after our first album.”

Frey also had a hand in writing the Eagles’ “One of These Nights,” “Take It to The Limit” and “Lyin’ Eyes,” with the guitarist contributing lead vocals to the latter. The Eagles would reach their peak in 1976 with their landmark Hotel California, with the title track – penned by Frey, Henley and guitarist Don Felder – winning the Grammy for Record of the Year; “Hotel California,” like the album’s Frey, Henley and Joe Walsh-written “Life in the Fast Lane,” would become classic rock staples, and the LP itself would place Number 37 on Rolling Stone‘s all-time list.

In 1979, the Eagles released The Long Run, which featured the last songs they recorded together until the 1994 reunion live LP Hell Freezes Over. On Long Run, Frey provided vocals on the album’s most lasting single, “Heartache Tonight,” while also co-writing the title track and the Timothy B. Schmit-sung “I Can’t Tell You Why.” The following year, a fallout between Frey and Felder ultimately resulting in the group disbanding.

As a solo artist, Frey enjoyed a string of hits that included the Beverly Hills Cop track “The Heat Is On” and “You Belong to the City,” a song penned for Miami Vice but took on a second life as a New York anthem thanks to its association with the 1986 World Series-winning New York Mets and Jay Z’s Frey-sampling “The City Is Mine.” Frey released five solo albums during this period, and also dabbled in acting, appearing in Miami Vice and later Jerry Maguire. That film’s director, Cameron Crowe, famously interviewed the Eagles for a 1975 Rolling Stone cover story, which would later inspire the filmmaker’s Almost Famous.

In 1993, thanks in part to Travis Tritt’s attempts to reconcile the Eagles for the music video for his “Take It Easy” cover, the Eagles lineup of Frey, Henley, Felder, Schmit and Walsh reunited for good for 1994’s Hell Freezes Over, the title a nod to what it would take to get the Eagles back together. The reunited Eagles toured for nearly six years, with sporadic postponements as Frey dealt with medical issues that would occasionally plague him for the next two decades. In 1998, the Eagles were inducted into the Rock and Roll Hall of Fame, with the seven core members performing “Hotel California” and “Take It Easy” together.

In 2007, an Eagles lineup of Frey, Henley, Walsh and Schmit released Long Road Out of Eden, the band’s first full-length LP since The Long Run. That was followed by a critically acclaimed documentary History of the Eagles as well as another long stretch of tour dates.

In addition to the Eagles’ statement – signed by his fellow band members, their management as well as Frey’s family – the group also shared the lyrics to Eagles’ “It’s Your World Now,” a Frey co-written track from their Long Road Out of Eden. “But first a kiss, one glass of wine / Just one more dance while there’s still time / My one last wish: someday, you’ll see /How hard I tried and how much you meant to me.”