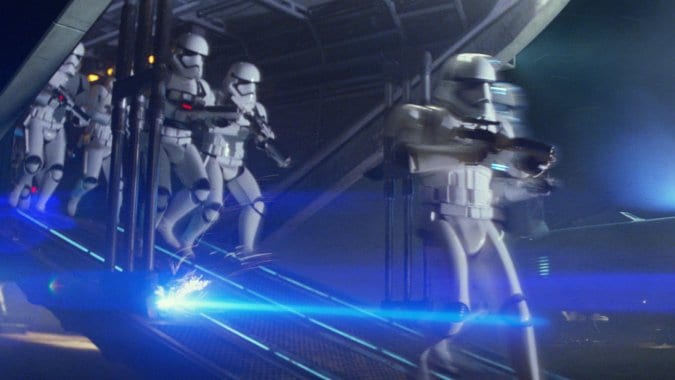 The Revenant exploded this weekend as audiences showed up in droves to see Leonardo DiCaprio brave the elements in his quest for revenge. The strong Oscar contender expanded into 3,375 theaters and amassed an impressive $38 million taking second only to Star Wars: The Force Awakens, which not only finished #1 domestically but started its China release strong. Meanwhile The Forest continues to prove there’s a reliable audience willing to show up for low budget, PG-13 horror at the beginning of the year.

First for The Revenant, which not only decimated BoxOfficeMojo projections, but seems to have proven the idea of a star’s drawing power is not as dead as some may have you believe. DiCaprio’s last five films that opened in over 3,000 theaters have all grossed $30 million or more in their opening weekend. And that doesn’t include Shutter Island, which opened in 2,991 theaters back in 2010 and brought in $41 million. The $38 million for The Revenant serves as DiCaprio’s fourth largest opening of all-time.

Additionally, the film’s opening places it in the top five January openings of all-time, edging out Lone Survivor. Internationally, The Revenant pulled in an estimated $20.2 million from nine markets giving it a worldwide cume of $58.2 million.

Next weekend will be interesting as The Revenant is likely to find itself nominated in several Oscar categories this coming Thursday. Last year American Sniper dropped only 27.6% after its record-breaking opening, but it also had an “A+” CinemaScore compared to the “B+” The Revenant received. Other comparable titles and their second weekends include a 25.5% drop for Gran Torino in 2009, Zero Dark Thirty dipped 35.4% in 2013 andLone Survivor fell 41.7%. Right now, a drop around 35-38% seems like a most likely scenario.

Moving up the charts for a second, we find The Force Awakens taking first place for the fourth weekend in a row with an estimated $41.6 million. With that it has become the first film to gross over $800 million domestically with a massive $812 million and isn’t done yet. Add to that it just brought in an estimated $53 million in its first two days in China. Disney is reporting this as the largest Saturday/Sunday opening of all-time in the country, but it should be noted it’s the only film to have ever opened on a Saturday in China. That said, it obviously scored the biggest Saturday opening of all-time.

Globally, Star Wars is now the third highest grossing worldwide release of all-time with over $1.73 billion. Based on international numbers alone, it is now the seventh highest grossing release with $921.4 million, just behindAvengers: Age of Ultron. The most obvious goal now is to become only the third film ever to cross $2 billion worldwide.

Finishing fourth is the weekend’s only other new wide release, The Forest, which performed well, bringing in an estimated $13 million. If it can hold on next weekend it could end its run around $35 million, but the “C” CinemaScore, negative reviews and recent history don’t bode well. Similar January releases such as The Woman in Black 2 and Paranormal Activity: The Marked Ones scored “C” CinemaScores while opening in the mid-to-high teens and found themselves dropping 69.7% and 65.7% respectively in their second weekends. The Marked Ones was able to finish at $32 million, but it was part of a franchise and scored $18.3 million its opening weekend. If history teaches us anything, The Forest is looking at a $22-25 million run.

Moving down the list, while The Revenant exploded, Quentin Tarantino‘s The Hateful Eight imploded as the filmmaker’s latest film fell short of expectations last weekend and now, in its second weekend in wide release, it has dropped 59.6%. Even worse, that drop comes as the film expanded into 464 additional theaters. With an estimated $6.3 million this weekend the film is up to $41.4 million domestically and looking to top out around $50 million or so.

A couple of other films expanded this weekend and also didn’t make much of a dent. The Big Short has had a very good run, but the addition of another 941 theaters this weekend didn’t do much to bolster its box office as it dropped 30.5% for an estimated $6.3 million weekend. The film’s cume now stands at $42.8 million and if it can perform well at the Golden Globes tonight and snag a few Oscar nominations perhaps it can look forward to a strong hold next weekend.

Also looking for some award season love, but failing to get it at this past week’s Producers Guild nominations, The Weinstein Co. expanded Carol into an additional 336 theaters, but the film could only muster an estimated $1.4 million. An Oscar nod or two for its two leads, Cate Blanchett and Rooney Mara, would definitely help things along.

IFC’s release of 45 Years through their Sundance Selects label continues to play strong in New York and Los Angeles, bringing in another $90,567 from nine screens. The studio will begin the film’s national expansion on January 22nd, though don’t be shocked if you see a few theaters added next weekend as star Charlotte Ramplingis very likely to hear her name as Best Actress nominee this coming Thursday.

Finally, if you scroll down the chart to 19th place you’ll find Spectre. The latest James Bond film is currently playing in 379 theaters and brought in another $405,000 this weekend bringing its cume to $198.5 million. Sony is doing its best to push it over $200 million domestically, will it make it?

Next weekend sees three new wide releases entering the fray beginning with the Ice Cube and Kevin Hartsequel Ride Along hoping for another $40M+ opening, the animated feature Norm of the North and Michael Bay‘s newest film 13 Hours: The Secret Soldiers of Benghazi.

You can find the complete weekend results right here and look for weekend actuals on Monday afternoon.